I had been looking forward to getting to see this DVD. I had not paid the attention
to everyone I wanted at the actual recording and my interest in Mostly Autumn
had changed dramatically since I first saw them live. The DVD was the first
time I had had opportunity to see the band live and although I had the got all
the albums and enjoyed them I was still a little reserved about the band.
Since the gig I have reviewed all the albums, seen them live again and then
interviewed Bryan and Heather giving them the longest interview they had done
so far. Seeing them had really helped my appreciation of the music and interviewing
them had made me look at the lyrics and appreciate even more. So by the time
of the screening I was probably twice the fan of the band as I had been at the
actual gig. 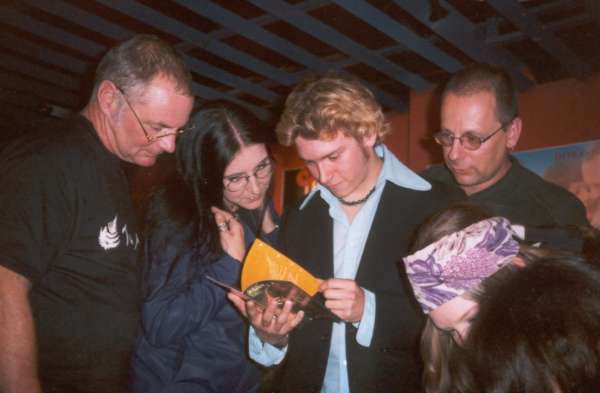 The band had never seen the DVD package before.
On the Right of Jonathan is fan magazine "Autumn Leaves" Simon Musk

The recent events in America meant a Roger Dean Press
conference I had decided to go to was delayed until the morning of the screening
so I had a day of Classic Rock Legends promotions. I hadn’t been that sure weather
to bother meeting Roger as I have only limited ways in which I can help promote
him but I really enjoyed hearing him talk about his art and looking at the Fine
Prints on display. Again talking to the artist had helped my understanding more.

That interview finished about 12.30 so I grabbed a bit of lunch and then made
my way to the Press Screening of the DVD. I was half an hour early or so but
the band were all there and it was nice to have a quick chat with Bryan’s mum
Jean.

As usual I was a bit tongue tied as I don’t have a lot to say as a rule but
it was nice watching others talk and seeing how well the band interact with
each other. 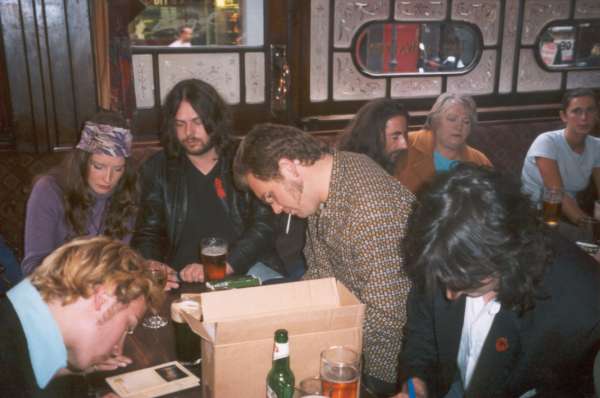 Mr Young’s was a small 40 seater preview cinema. It seems to be dedicated to
just previewing films etc. Overall I thought the sound and pictures were a lot
better there compared to Planet Hollywood which was used for the public screening.
Planet Hollywood was an 80 seater and the screen was therefore larger. This
kind of highlighted the limitations of showing TV footage on a big screen though.
You could see the horizontal lines making the picture a lot more clearly. Obviously
you soon focused them out but I also felt the sound wasn’t as bassy as I like
it. 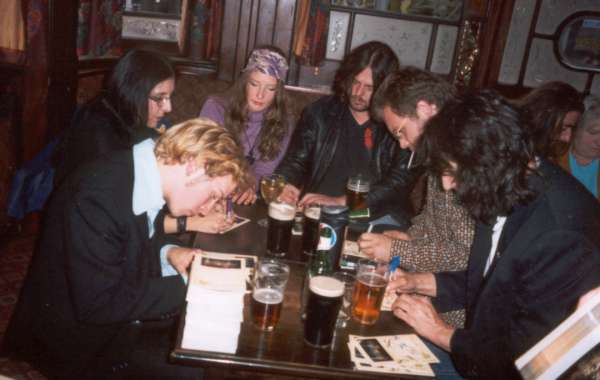 Of the two screenings I also probably enjoyed the atmosphere, as Mr Young’s
more. This was the first time the band had seen the end results and they were
quite open with their Mickey taking. 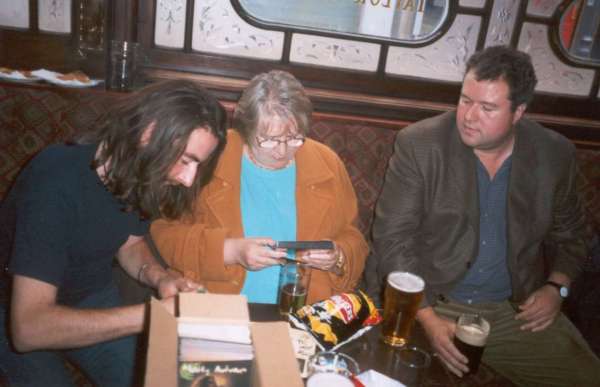 In the middle is Bryan’s mum Jean. And Bob
from the record company is supervising.

Between the screening the band went down the pub and started signing the booklets
for the DVD’s. They did around a 1000 between the two screenings. Sadly for
them they had an irritating fan suggesting they should smile while doing it
;-). It was very much a factory line process and it is a good job I had got
any signatures I needed before the screening.

While they were doing that I had a good chat with the cameramen, Bryan’s brother
Andy and the vision mixer of the DVD. That was interesting as I told him my
opinion without knowing who he was. I am happy to express my opinion anyway
but I think it is wise to know whom you are talking too as a rule! He seemed
a nice bloke and it was again interesting hearing how he approached it even
if I am less keen than him on the practice session run threw being inserted
into the actual concert footage. He explained that he does it to keep things
lively. He feels people would get bored after 90 minutes of the same shots.
Adding the extra footage wakes people up and keeps them fresh. He also said
that it tries not to fall into the trap of always cutting on the beat. 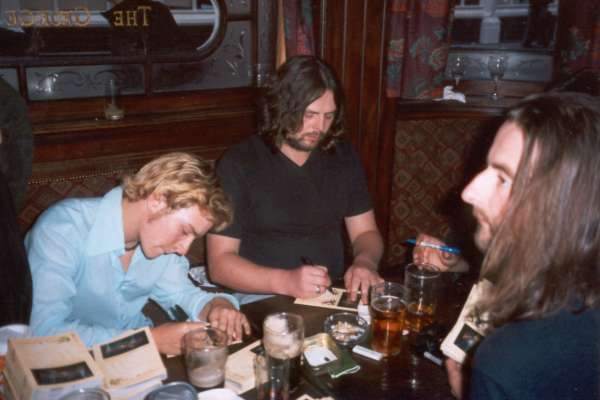 I like to see what I am hearing so I find the practice clips rather annoying.
But it is horses for courses and I fully accept his point of view. I really
enjoyed the addition of scenery but I will review the DVD separately. It is
excellent though!