Rick doesn’t have the greatest of luck. Nothing seemed to go smoothly for him. The weather
was fine crossing to the Island which is good as it was very bad early in the
week and was expected to be bad again over the weekend. (Personally I wish it
was I love watching rough weather and the spray from the sea was apparently
reaching to top of the Winter Gardens which is quite a way up.) 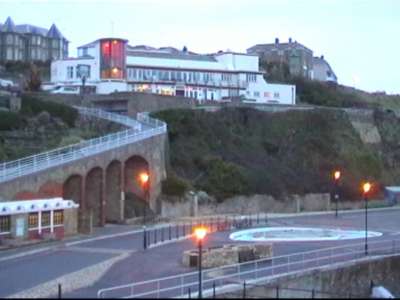 The B&B was next door to the venue so that was handy. I also got to the
gig very early and since Mike Holden knew me and that I had travelled a long
way he allowed me past the crowd control to see Rick and a junior string group
being interviewed by the BBC South Today Program. About 7.20 the crowd were
about to be let in and Bang! out went the lights. Not just for the venue but
most of Ventnor!

We had a bonus warm up act which was handy as they were completely acoustic
and the power cut lasted for 35 minutes. I am sure a lot of people got quite
frustrated. They were waiting in a crowded dark area. Not great for the atmosphere
but the venue weren’t too sure about letting the crowd in the hall due to the
amount of electrical equipment. Eventually someone made the decision and the
crowd were allowed in. 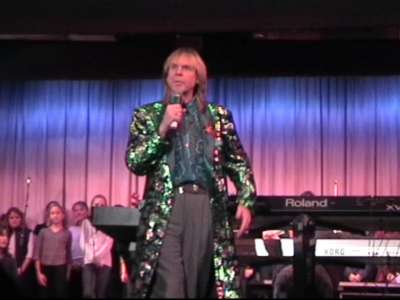 New Forest Junior Strings had been going to play a concert for the Auschwitz
survivors in London on the 10th December. Unfortunately their venue pulled out
and they had no where to play. The BBC got involved and someone there got in
touch with Mike Holden and it was arranged for them to play here. Just a little
way into their set the lights returned thus allowing the BBC Cameras to start
filming them again. Unfortunately there was no introduction to them so they
just started playing the the crowd kept talking. I couldn’t work out if they
were warming up or playing for real. It turned out they were playing for real
so I felt sorry for them that the audience didn’t keep quite for them. The did
applaud at the end of most tunes though.

They had 5 Violin type instruments. Some looked a bit smaller actually. And
2 Viola’s(?)

The string section finished with the Womble theme and it has to be said they
were very good for their age. It made me think back to my time in wind band
when I was in secondary school. They were a lot younger though the youngest
being 8 and with exclusion of the teacher the oldest probably being 11. Rick
came on and thanked them. And was about to introduce the first number and Bang.
The Power went again! Rick crawled around on stage as Mike Holden shown a flash
light at him and then he started to tell Jokes without the power. Luckily this
was a quick one but it still took a few minutes to reset all the systems. Thankfully
the power remained OK from then on.

The Night was in aid of Cancer Research and Care and Friends of the Animals.
The Venue was an old Musical Hall type place holding about 400 people and to
my relief was close to capacity. I was very worried when my ticket arrived and
it was only No. 16. I hadn’t exactly been quick off the mark booking it. 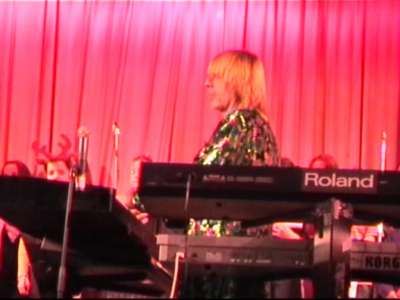 The First track was by the Ventnor Middle School Choir and was sung while the
PA played the Christmas Variations version of Silent Night.

Then it was time for the first audience participation, Rudolph The Red Nose
Reindeer. It took ages for Rick to get the House lights turned up again. He
copes with this very amusingly though. It wasn’t a straight Rudolph though as
there were lots of silly interjections from a subsection of the choir. After
a run through with everyone singing just the interjections. Their was a whole
performance. 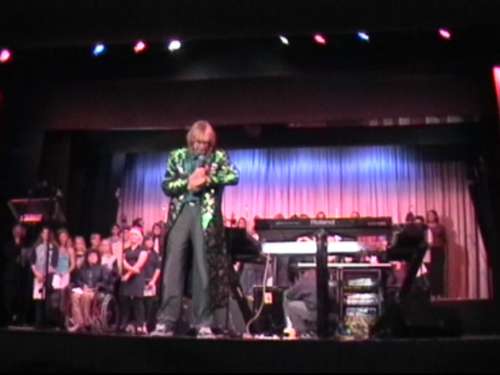 At this point I will mention there were quiet a few video cameras in the theatre.
None on the stage though so I can’t work out what was being filmed and for that
purpose. I do know most of the songs were covered though.

We then relapsed into church tour mode for the intro of Ramon Remedios. He
was introduced as a prima donna and then came on speaking with a foreign accent
until Rick reminded him he was Liverpudlian. He also mentioned Ramon had been
misspelt on the Posters as Rambo again.

We then got Welcome A Star complete with Choir backing which was nice. The
choir did seem to loose confidence on the words occasionally and then they would
loose their way a bit. It happened a couple of times during the night. So I
wonder why they weren’t allowed to used crib sheets. It was nice to hear again
all the same. 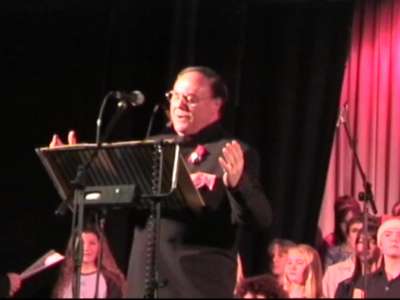 Rick then moaned about the lack of a Christmas tree on stage and a farther
Christmas bought one out. A very poor one though. 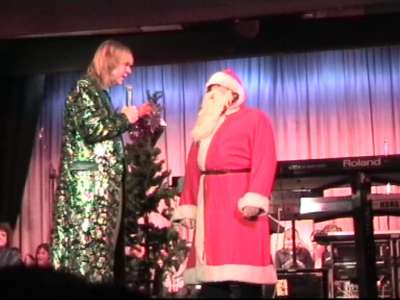 The Choir was commonly referred to as VMS and Rick commented it sound like
some kind of disease you catch. He then added that so does Ramon Remedios. You
just imagine a doctor saying "I am sorry you have a bad case of The Ramon
Remedios".

Next was the 12 days of Christmas with actions. First by the choir and then
with the theatre split down the middle one half on Father Christmas’ side and
the half on Ramon’s. This required standing up and doing the actions and it
completely disabled my brain and made me rather Giddy. Luckily I saw a teenager
refusing to take part on the first row and Rick wasn’t hassling him so I decided
it was safe to opt out. It was a close call though as Rick was commenting about
the man to me during the actions. People not doing the actions were threatened
with being taken on stage. 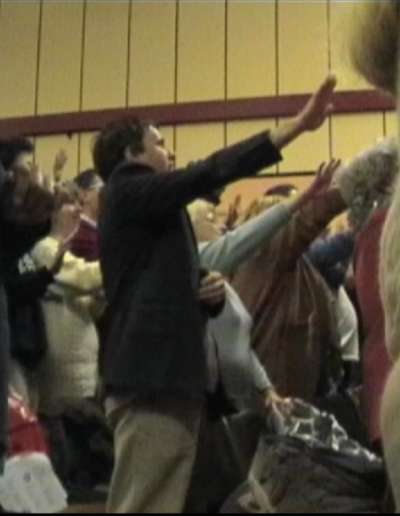 No Not a Nazi Party rally! They are at the
Five Gold Rings action in 12 days of Christmas

The Choir and Rick then did Frosty The Snowman.

Next James Pellow was introduced then did a kind of spoof sermon on Christmas.
It was done in a Vicar type voice but contained amusing reference to eating
turkey for days and playstations etc. 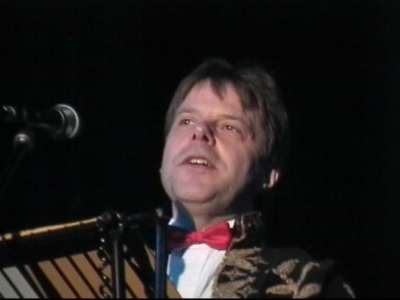 Good King Wenceslas and Ding Dong Merrily On High were then performed
by Rick, Ramon and Choir. The Audience were supposed to join in. They didn’t
so Rick stopped and threatened the non singers with going on stage. Father Christmas
was then called on to spot the poor singers. He found about 5.

To finish the first half it was back to the church tour for Nessun Dorma intro
and performance. Again it was good to see.

During the interval we were given free wine and Mince Pies. I was interesting
to hear the comments. One woman was very unhappy. She found it boring and wished
"He would stop messing around and get on with it". I think most people
were very much enjoying things though. I must admit I was enjoying it a lot
more than I would expect to if you told me I was going to this sort of thing.

The 2nd Half was started like the first with the Choir singing to a Rick Christmas
Variations track. This time Once In Royal David’s City. This I thought was disappointing
as it was just too slow for the Choir to be singing. It is fine as an Instrumental
but I really wanted to wind it up for the choir sake. 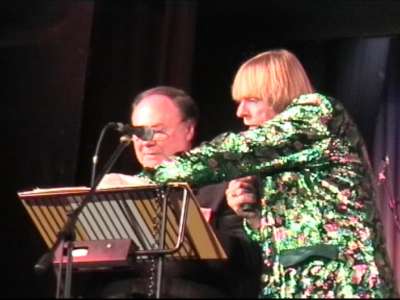 Ramon then came back on for the Barber of Wigan again the intro and performance
were as per the church tour. Let hope the video recording for this sees the
light of day! Again it was good to see Rick really laughing during this performance.
I am still very intrigued that Rick needs read music for some of his songs but
not others. This was another example. 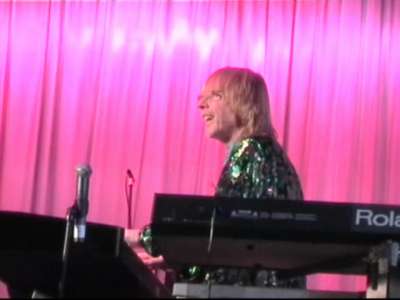 James Pellow was next and he did an amazing performance of Nicholas Nocks of
Nottingham a great tongue Twister performed without mistake as far as I could
spot. Apparently it doesn’t always go as well. I am reasonably certain this
was performed from Memory. I guess it was a classic Two Ronnies’ Ronnie Barker
type monologue.

Rick was still moaning about the state of the Christmas tree and said Santa could
at least go and get a fairy for it. The Fairy turned out to be Mike Holden. 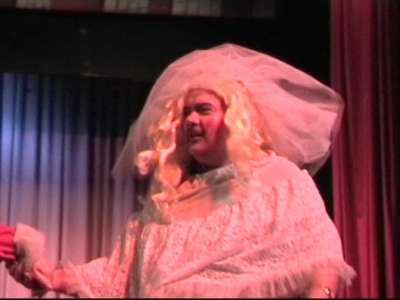 Rick and Ramon then put on some antlers and very seriously performed White
Christmas. 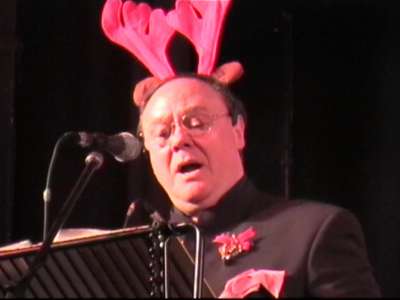 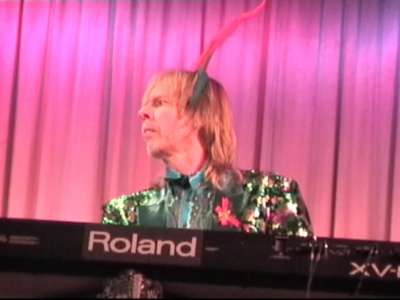 The crowd joined in for the 2nd time round. Rick having a large head had trouble
keeping his Antlers on.  Eventually as he was stuffing his face on Mince
Pies and trying talk it fell down so he just wore it as a beard. 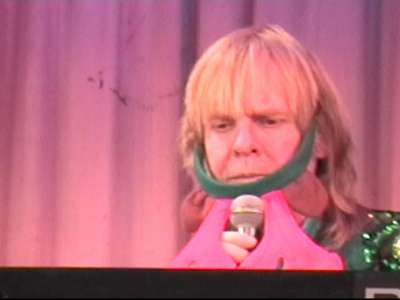 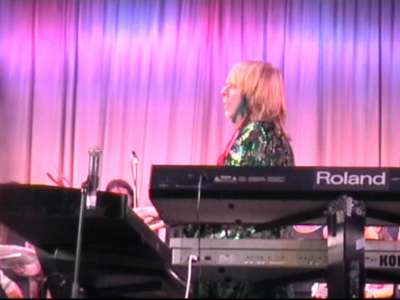 We were then expected to sing O’Little Town of Bethlehem and O Come All Ye
Faithful. I must say Rick did look extremely serious and bored during this.
It might just be that I am not used to watching him playing with his eyes open.
This is so rare unless he is reading music/chords. A raffled was then drawn
with the fairy drawing the first number and amusingly it was his wife’s ticket. 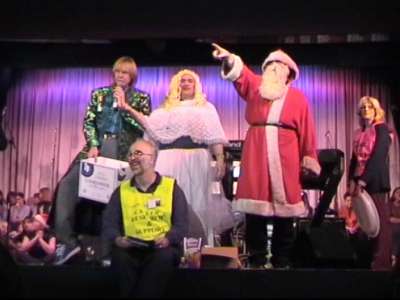 Finally the evening ended on Jingle Bells/We Wish you a Merry Christmas/Auld
Lang Syne and the crowd again being pulled onto the stage if they weren’t singing.
The lady next but one to me was pulled out despite singing and I was amused
at how loud her husband suddenly started singing but he then got pulled up to!
I was now on the end of the row and extremely worried! Luckily the songs
ended before they got me though. 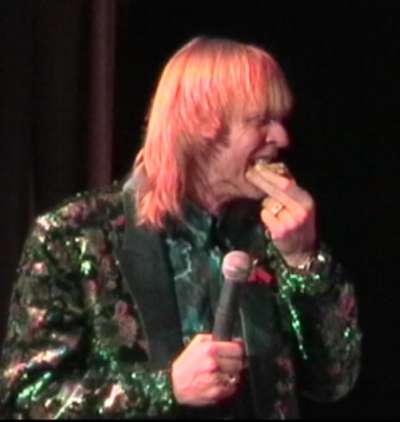 After the gig it was most unusual to see Rick making sure he had some personal
photos of the night to remember.

Overall the night was great fun and I would make the effort to go again.
It is nice to see Rick mucking about and generally having a good time in aid
of charity. It wasn’t a night for serious Rick music fans but I don’t suppose
to many would have expected it to be. I guess it was a bit like a Christmas
version of the Caring At Clatterbridge concert Rick did in Liverpool in 1998. 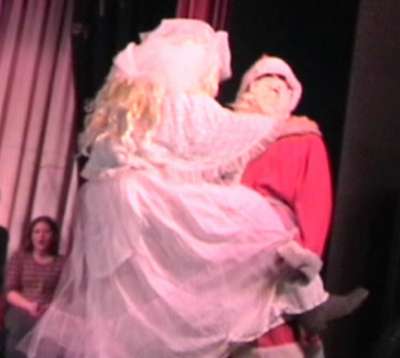