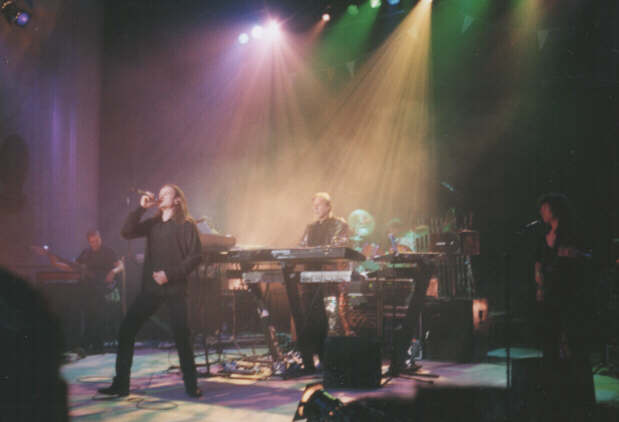 Well what a great month August has been for me concert wise. First I saw Praying
Mantis and then tonight Rick Wakeman with as a six Piece band. Possibly with
the exception of Ayreon who don’t play live anyway the best two acts I would
like to see.

Tonight was really great. Marlborough College Memorial is basically a large
lecture hall. I believe it holds about 600 and it was close to capacity. There
were about 12 rows steeply banked in a semi-circle around the Stage. 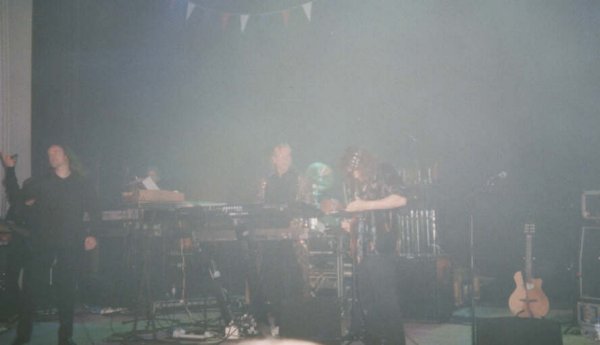 It’s always a dilemma weather to use the flash
or not. Rick doesn’t mind so I used it more than normal but it whites out too
much. The alternative is no flash and more Blur. My experience of faster films
has been inconclusive and expensive so I don’t bother.

To my surprised the stage wasn’t in the Wakeman with Wakeman format. Rick was
more centre Stage with the normal bank of 6 keyboards in pairs forming a horseshoe.
He also had a Moog on the right-hand corner. Adam was off to the left and situated
further back.

The guitarist Ant Glynne was on the right and the bass player Lee Pomeroy to
the left. Tony Fernandez on drums was on a riser behind Rick. For the first
time that I can recall he was on his old faithful acoustic drum set and not
on the Electric one he normally uses with Rick. I must admit I think I preferred
this one. I was also interested to spot he plays the drums with one stick up
and one stick down in his hand. I can’t recall seeing too many drummers that
don’t hold them both up. Perhaps it was the type of music I listen to. 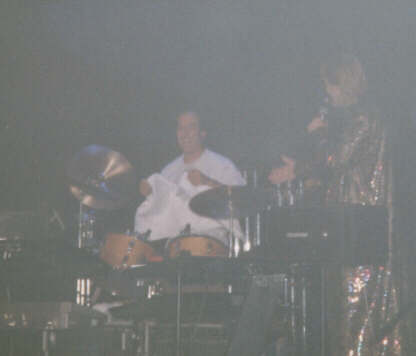 The first thing I noticed was that Adam and Tony still enjoy having a laugh
together while playing. Adam and Lee also seemed to enjoy the way Ant was very
much into pulling poses when setting forward to play solos. I wasn’t quite sure
if I liked his playing or not. I was certainly thrown by it during the King
Arthur the first track. As the night wore on I got used to his style and figured
it was probably as Rick told him anyway. 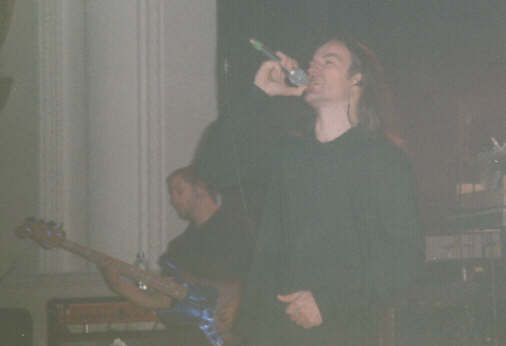 Damian Wilson was on vocals. I know his voice from the Ayreon albums. He has
a very strong voice and I think he is better on the more gentle songs like King
Arthur. I wasn’t as keen on him on the faster vocals. I possibly still prefer
to have had Chrissie Hammond singing but then she is my favourite Rick vocalist.
Damian was pretty spot on all night. I suspect he forgot how Ride Of Your Life
went though and he said something about having another week to learn the songs
better when I was chatting with him after the show. When Damian wasn’t singing
he remained on stage a fair bit standing between Rick and Adam and watching
Rick soloing close up. He seemed as fascinated as us at the master at work. 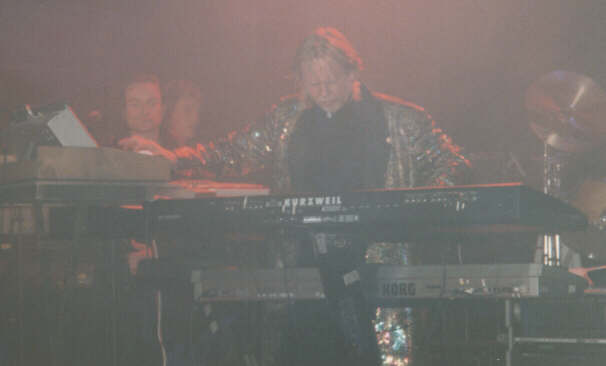 The set list was excellent three tracks of Return and One of Phantom Power.
I couldn’t believe my ears when Rick said they were going to do something of
Phantom. Phantom is on of my favourite Rick albums and very underrated especially
as it is no longer available. The crowd were pretty indifferent when Rick announced
the track but they certainly responded well at the end. Apparently I have Oscar
Wakeman to thank for The Visit’s inclusion. Rick wanted to do a song he hadn’t
played before and that was Oscar’s favourite.

Never Is A Long Time – I wasn’t sure how well this worked. I was impressed
the guitar did the parts of the Riffs played by the Orchestra quite well. Rick
wore his glasses on all the Return tunes. I can’t recall if they were need for
The Visit too but I find it interesting he isn’t confident of remembering these
new tunes.

Catherine Howard and Aragon – Fairly standard versions to my memory 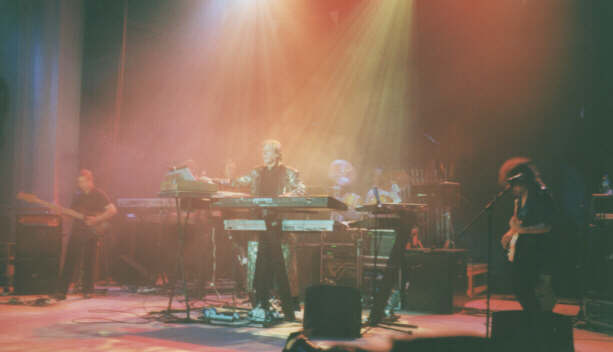 The Visit – Rick and the Guitarist took turns at solos on this. I thought it
sounded pretty good. Ramon Ramedios was in the audience it might have been interesting
to have him come up on this one. There were some songs on the album where Ashley
Holt (I wonder where what he is doing now), Ramon and Chrissie all sang. I thing
this was just Ashley with Chrissie backing on the album but Ramon might have
joined in on a reprise or something.

Excerpts From Journey – I was pleased not to get the full thing. That was one
of the downers for me of when I saw Rick and the Band before. It is just too
long and I prefer the variety of using the time for more pieces. As it was we
got 15 minutes of the main bits that spring to my mind when I hear the piece. 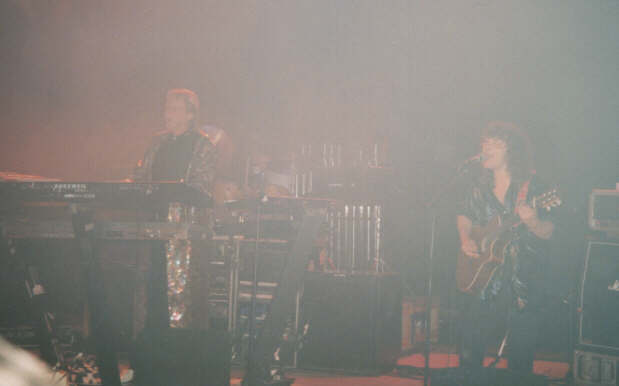 Catherine Parr – On the set list it had Jane Seymour in brackets at the start
but I don’t recall hearing it and I certainly remember thinking during the set
that Rick might do it as first encore with just Adam as accompaniment before
doing a final song with the whole band. 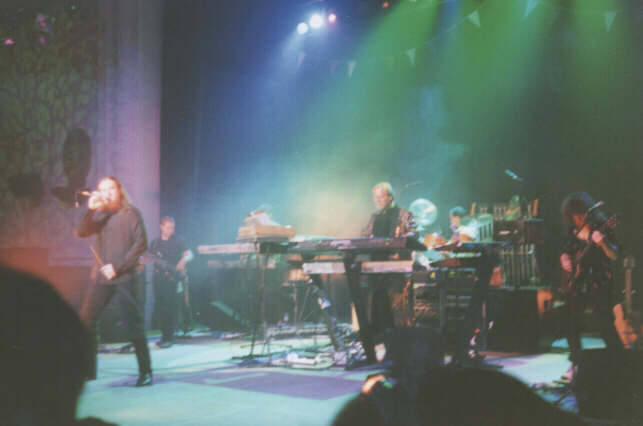 Eleanor Rigby – This was a vocal version again

Buried Alive – I wasn’t too sure how this would sound without Ozzy on vocals
but Damian sounded really good.

1984 Overture/Hymn/Robot Man – I think this was pretty much as the last time
I was the band with Rick and a vocalist. 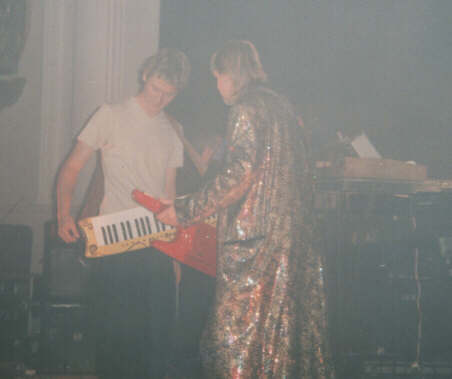 Merlin – This was a slightly strange version. I couldn’t work out what I was
hearing at the start. It seemed to have a Robot Man feel to it to me. I suspect
my brain was just fudge by this time though and it was probably just a funky
Merlin with a slightly heavier beat. It then went in to the Lyric version of
Merlin. Adam and Rick did their dual again with the two Portable keyboards this
was great to see again. 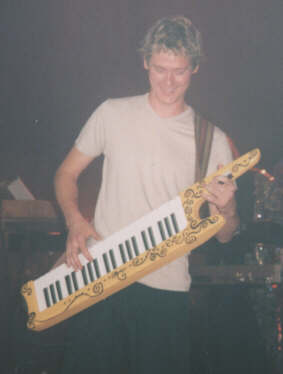 It’s odd seeing Adam with short hair and highlights.
He apparently did it because his image was wrong for an Alternative band he
was with.

Starship Trooper – This started with the intro from Heart Of The Sunrise. Again
Adam came out on the Portable keyboard. It was the only real times I could see
what he was doing as Rick’s Moog blocked my line of sight of Adam’s Rig. Rick
was absolutely brilliant at the end of this. I really couldn’t believe how well
he played the Wurm section. And the band really seemed to enjoy playing so fast
so well. Fantastic. 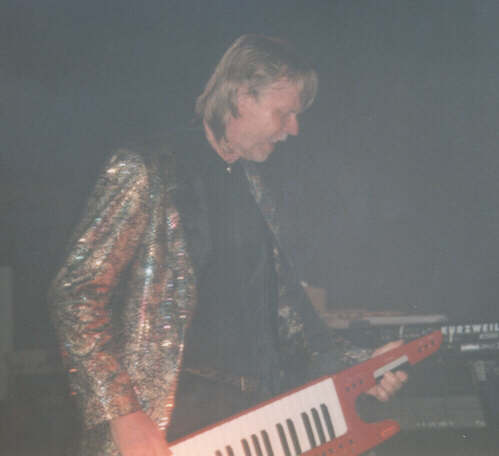 Jig – To me this was a strange choice for an Encore but then what can you follow
Starship Trooper and Merlin with? Damian went off stage and bought a little
girl from the front row to dance the jig with him, which was nice. When he got
out of puff she wouldn’t continue alone so he had to carry on. 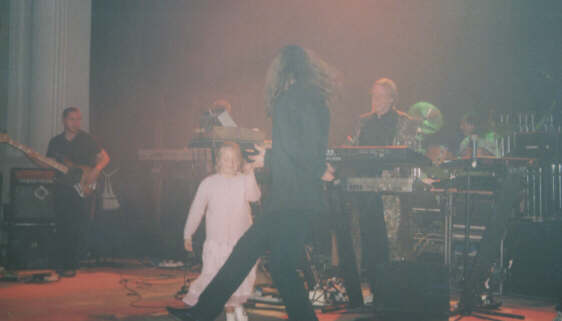 Ride Of Your Life – Again I found this a slightly strange encore piece but
it was good to hear. 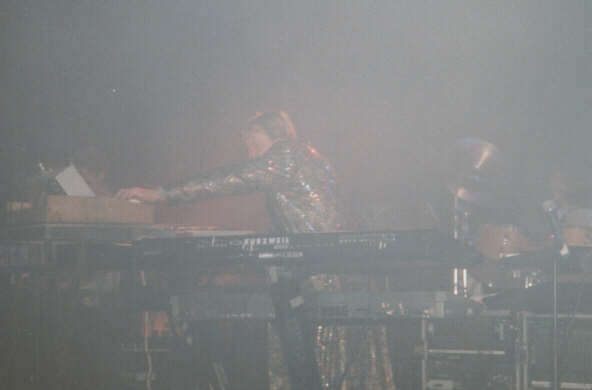 I was surprised to see Rick using his Left hand
on the Moog. It’s normally the right or both

There were no real stories tonight. Just 2hr 15-20 of solid music. The Lee
needed a new string on his bass at one point and it took a while to get someone
from the crew to come along and take the bass off stage while he placed his
spare. Ant also broke a string during the encore as well but he got by with
his other guitars. 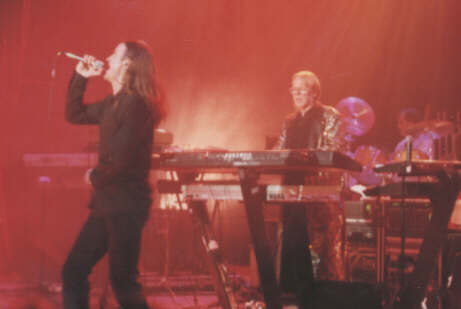 Ride Of Your Life so Rick is wearing Glasses
again.

Oh there was also a bat came flying around during the encore. I think it would
have been more amusing if it had come of during Buried Alive, which was originally
sung by Ozzy Osbourne. However you can understand a bat’s reluctance to show
up during anything associated with Ozzy. 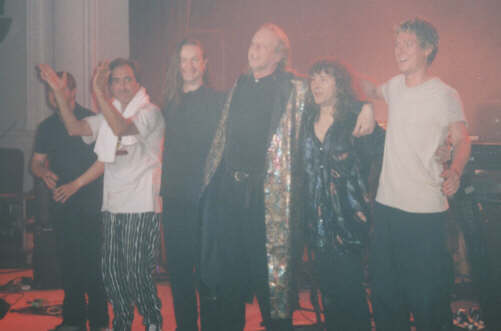 There were several members of the Rick Wakeman list in the crowd and it was
good to meet up with them. 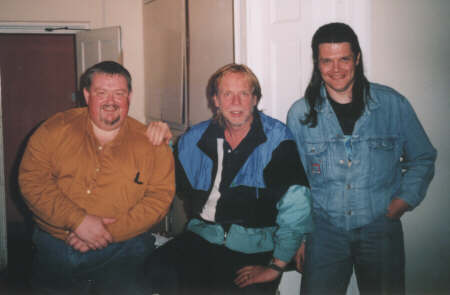 Marc Harry, Rick and Me.

It was a great night out and I look forward to the next time Rick can afford
to get a band together to play. I dearly hope someone in South America Records
Rick for TV or CD releases. We really need a new recording of Rick with and
Band and Vocalist.