This was a one off solo gig by Rick and it was only 30 miles from me so I booked
it instantly. I was especially keen as Rick has supposedly given up doing one
man shows. 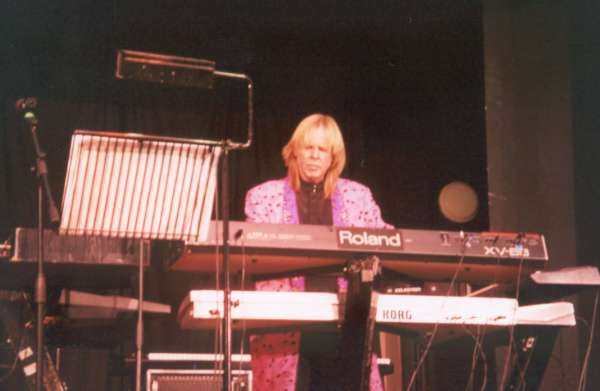 However being a one man show I wasn’t as excited by it as I would have been
a full band show. I had seen the show solo in Holland and I had also seen the
last tour with Ramon. I was expecting Rick to me completely solo so when I arrived
and saw a 2nd microphone and music stand I surprised. When I found out the Ashley
Holt would be singing I was absolutely delighted. I first saw Rick in 85 and
then again in 91. Since then I have seen him at least once on most tours. I
have therefore never seen Rick with Ashley. I was really jealous when I heard
Ashley had had to stand in for Ramon on one of the last dates of the last tour.
I had considered going to that particular gig and decided against it. So this
gig took on special significance for me. The set was pretty much as expected
but Ashley sang on four songs.

I was slightly concerned about the gig. First I had taken my children out Ten
Pin bowling in the morning so I was very tired and had had trouble with my painkiller
management. Luckily by the time I got to the gig I was up for it. My mum was
on driving duties and I was slightly concerned for her on two fronts. First
the tickets weren’t numbered so I wondered if the gig was standing or seating.
To my relief and even more my mum’s it was seating but first come first served
so we made sure we arrived early. Secondly I didn’t think mum would get on with
Ashley as a singer. I therefore warned her that he could be a bit of a screamer
and some Wakeman fans really didn’t get on with him while others like me had
a soft spot for him because his voice had good character even if there was a
little doubt about weather he was in tune 100% of the time.

When Rick introduced him as his favourite singer and some of the audience cheered
at his name. I think my mum wondered what I was talking about. No Earthly Connection
was the first song sung by Ashley and I thought mum would hate it but she said
he wasn’t too bad. Phew! 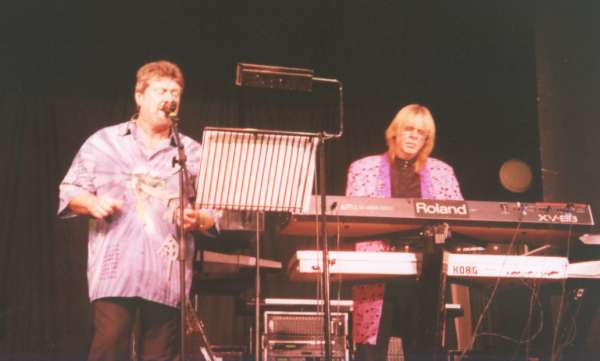 The hall was only a small place and there were 14 rows of either 14 or 15 seats.
It was sold out and the tickets were fairly expensive by Rick’s standards but
it was for pump to aid Cancer treatment.

Rick said that Malcolm McFee had done well to persuade him to do this one last
"Solo" show and he didn’t think anyone else would persuade him to
do another.

The stage was dressed in dark cloth and mum commented that Rick always seems
to dress in Black when she sees or rather doesn’t see him but tonight he was
wearing his Pink music note coat. The lights on the stage were never turned
down so it was very bright for the whole show. The sound was also very good.

The lights went down in the hall just after 7.30 and The Return Overture was
played over the speakers. As this finished Rick appeared and played to the backing
of Dance Of A Thousand Lights.

The set had a real good shuffle tonight so the first story was about Jon Anderson
and his painting of daisies on the Isle of Mann. This was followed by And You
And I and Wondrous stories. At this point I realised I had chosen a band seat
as Ashley’s music stand was in the way of seeing Rick when on the side keyboards
but luckiliy it didn’t bother me on the later songs. Perhaps he just did most
of the songs on the front keyboards. I certainly expected more on the Side one.
Eleanor Rigby is a side keyboard song at least. 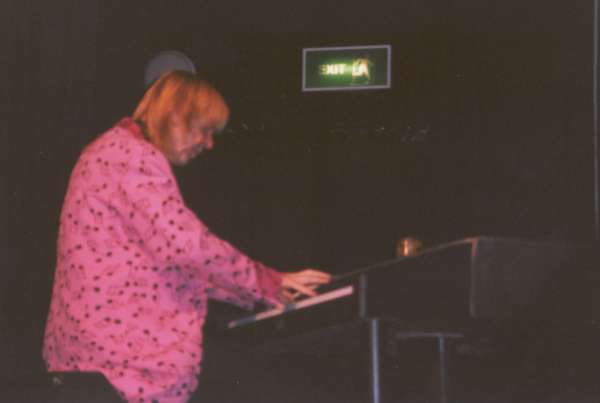 Then it was After The Ball which was proceeded by it’s story. I felt Rick was
giving us some extra details in this. Only minor ones of course because the
story is fundamentally the same each time I hear it.

There was some new Countdown Stories followed by No Earthly Connection. This
was Ashley’s first appearance and he had a blue shirt on which was very much
to my taste. He struck me as being very nervous. I am not sure if he was but
he sang really well. It was such a contrast to hearing Ramon do it on the last
tour. Ashley was rather loud compared to Rick for this song actually. I don’t
know if the balance was better later or if I just adjusted but it seemed better.
I was also interested that even in the quiet sections Ashley still sang with
more volume than expected. The feeling was correctly sung but it was louder
than I expected. 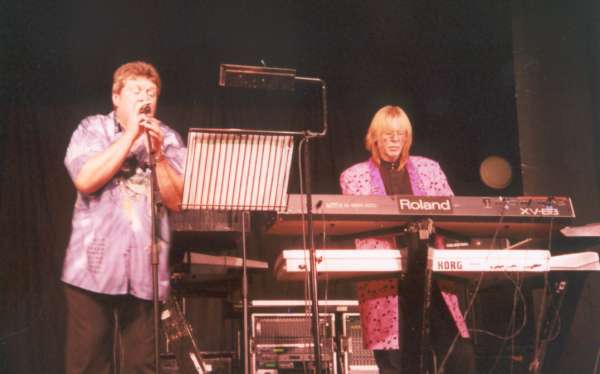 Morning Has Broken was preceded by the updated story of Rick never being paid
or credited for it. Mum commented that the music she had for her organ of this
peiece the the twiddly pieces at the start and end of the songs. I suggested
it was probably based on the the Cat Stevens single so we checked when we got
home and indeed the music was credited to Cat Stevens. No doubt much to Rick’s
frustration again.

Then it was Merlin The Magician with a Barbara from the audience as his stooge.
I was slightly disappointed Rick didn’t get Ashley to sing the lyrics on this. 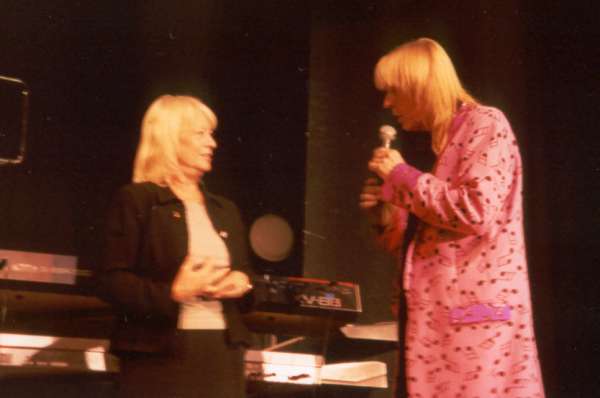 This was followed by old Countdown favourites along with the story of how he
wrote Seahorses. Rick of course then played this.

We got the standard intro and rendition of Nursery Rhyme Concerto.

Next it was the story of Rick’s mum and the OAP going to the 1984 Concert.
He then mentioned the same 10 people went and saw Status Quo a few months later,
which I had never heard before.

We then got Make Me A Woman. I really enjoyed this song. Again it was a good
contrast to hearing Ramon do it on the last tour. 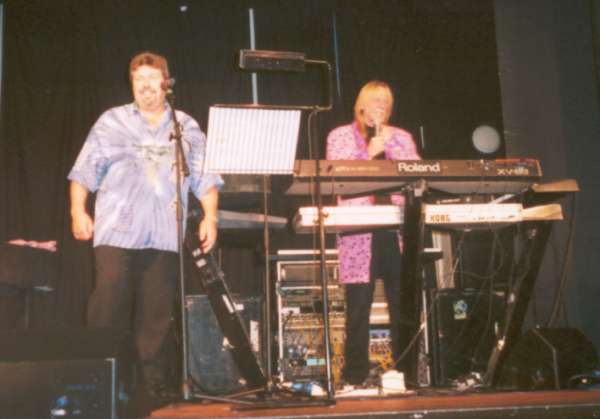 Jane Seymour and it’s story was next and was excellent as usual. I wonder why
Rick doesn’t play this with the band. He had Adam have certainly done it as
a duet on one of the tours.

We then got the story of Rick being done for Drunk Driving. It’s been a while
since I have heard that one I think.

Ashley was brought back for Fool on the Hill but strangely not Eleanor Rigby.
I thought Ramon had sang both of these on the previous tour but as I write this
I have just had a doubt about that and certainly checking my Folkestone gig
review I see Eleanor was indeed instrumental. Perhaps it is only with the full
band the Rick has done Eleanor with vocals.

Rick went off and stayed off for about a minute (a long time for him!) and
I was amazed how noisy the crowd were. In fact before the show started I heard
someone commenting how wonderful it was having Rick come and play in Braintree
so they were obviously a very keen crowd. 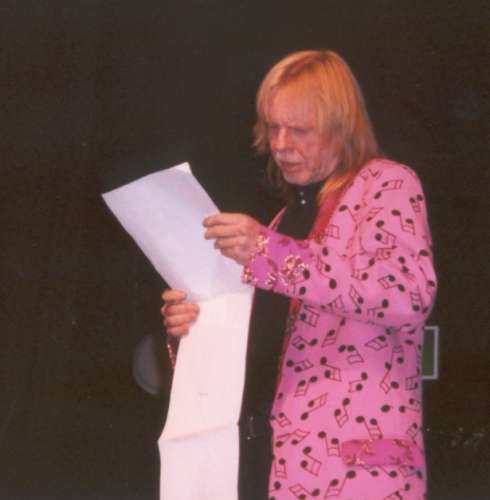 Rick normally does a slow gentle song to end the show but tonight we got Summer
time. Now if there is one song I hate it is Summer time. I have never liked
it and it amazes me how many bands cover it. Tonight I was really impressed
though. This was quite an upbeat version and it was really good to hear Rick
playing in a Piano style usual for him. Mum didn’t like it, which didn’t surprise
me. It was quite a Jam version really. Apparently Rick had changed the key twice
just to stretch Ashley a little further. Rick and Ashley from their comments
to each other clearly still get on very well.

It was a very good night. I was aware during the songs I had heard so many
times before that I was a bit stunned and not into it as I should have been.
But having Ashley and Jane Seymour in the set were the real highlights for me.

Another thing I noticed about the crowd was that how into the stories they
were. I still enjoy them but I tend just to smile to them now. A lot of the
crowd were really laughing out loud. It seemed so even more than the average
crowd. I bet Rick found the show really rewarding.

Strangely he spent less time with the Audience after the show. He definitely
seemed in a rush to get somewhere tonight. The crew also broke down the stage
gear really quickly. I bet they were done within an hour. They were certainly
got most of it put away within 1/2 an hour.