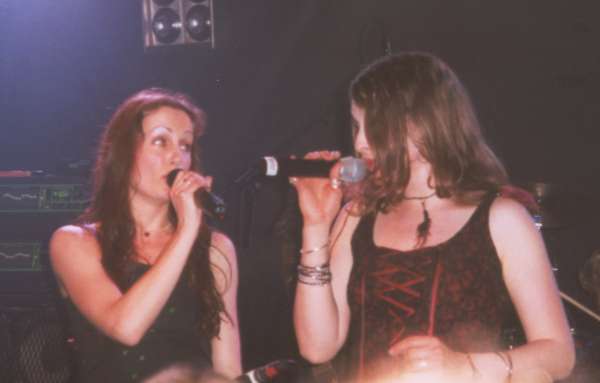 Well tonight I was supposed to be in Rotherham for a Damian Wilson concert.
Unfortunately he was taken ill and the gig was cancelled the day before. This
thus allowed me to make this gig, which I had been gutted about having to miss
when it was announced.

With luck the Damian gig will be rearranged so I will get to see both in the
end.

Being at the Mean Fiddler, former LA2, it was an early gig with an early finish
so the clubbers could get in. 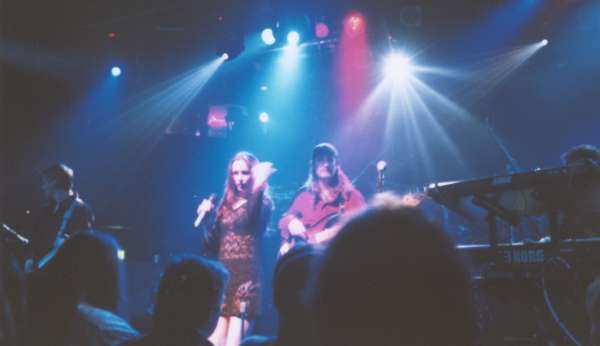 Karnataka hit the stage about 7pm. I suspect there was a standard Intro tape
and the same opening song from the DVD shooting. “Time Stands Still” I have
written down but I see it is not a track title on the 1st 2 albums so I have
no idea.

This was probably the first time I had listened to them on since the last gig.
My girlfriend has been playing "The Storm" almost non stop when I
phone her in the evenings so she is a big fan now. We were both very impressed
with tonight’s performance. I thought the general presentation had improved
a lot since the DVD shooting which I guess is a shame in one respect but obviously
good in the long run. 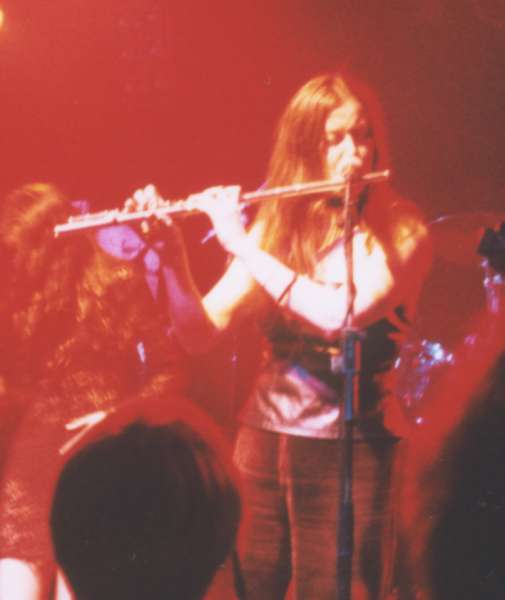 Tonight they had the guest Saxophone player again and the Flautist backing
singer. She stood next to Rachel when the song required and Maria thought she
had a very good voice. I thought having her interacting and laughing with Rachel
at the front loosened the whole band and made it more fun and more interesting
to watch.

I was stood on the right of the stage tonight so I was able to get a much better
view of what Jonathan Edwards was up to on keyboards. He seems quite a busy
man and keyboards feature quite heavily on the mix even thought there are no
solos as such. 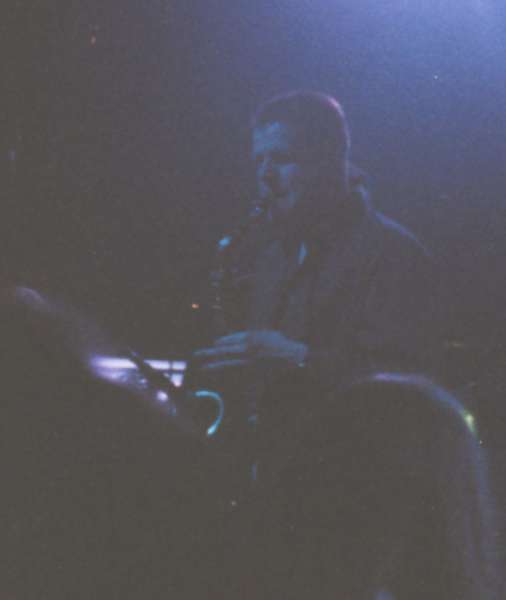 Paul Davies was still my man of the night on guitar. I really like what he
does and being live he comes across a lot louder that on "The Storm".

Since Maria is such a big fan now I decided to get the first album but I am
now a lot more interested in checking it out for my own pleasure.

I couldn’t see the set list this time so I am not sure what the set was or
should have been. It seemed pretty similar to the DVD shoot though. 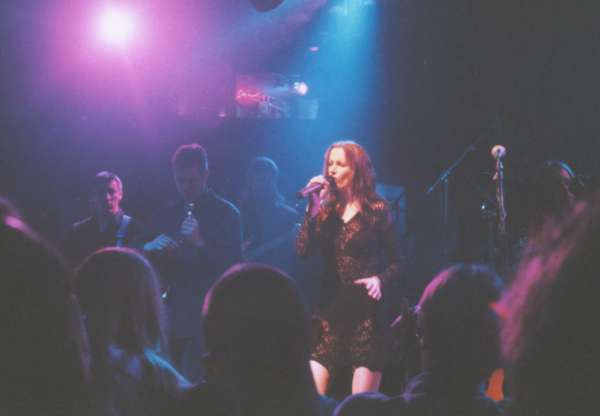 As I mentioned I think there was an opening tape and a song I haven’t been
able to work out a title for. “Dreamer” was possibly next. One song around this
point had Alto Sax on it.

Next up was “Heaven Can Wait”. Mostly Autumn’s Heather Findlay put in a guest
appearance on this. This was also the song where the backing singer played flute.

I think “Must Be The Devil” was next. It was a strong keyboard song and had
"I’ve been loving you so long it must be the devil leading me on"
in the lyrics.

"Please Excuse Me but I think you used me" is the next lyric I have
written down and that seems to be "Tell Me Why". I rather liked this
one on the night but on album at first sample it sounds a weak mix again 🙁 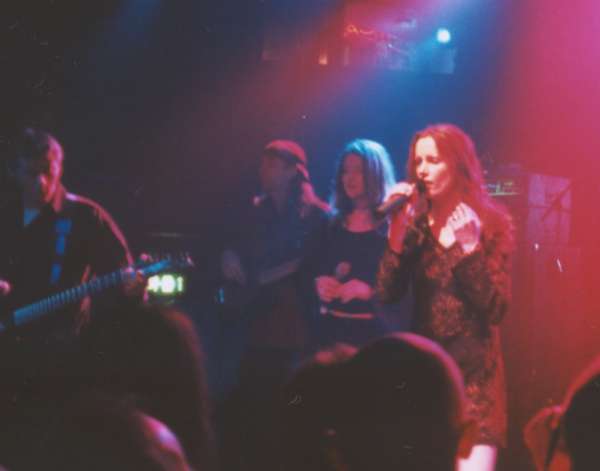 “Delicate Flame Of Desire” was played from the forthcoming 3rd album again.
Twice now I have thought I am not sure about this one. Strange really because
I don’t know the first album stuff any better. Perhaps it is less instant, which
in my experience can often mean it, is better once you get to know it.

“The Journey” finished the set. This time it was a Tenor Sax. Flute was also
used and Ian Jones switched from bass to acoustic guitar for this one.

At 8.20 Mostly Autumn hit the stage. Now while Karnataka really surprised me
by how much they had improved or at least impressed me Mostly Autumn were still
by far the my favourites of the night. I get the impression they are getting
more polished to but I will leave that to an expert to comment on.

Jonathan Blackmore sat at his drums and with a cymbal crash started the rhythm
of “Winter Mountain”. Then Andy Smith ran across stage adding in the bass. Everyone
else also came on stage too, so we got an immediate change to the set from the
UK tour. Angie seemed to be singing at the front more tonight but that could
just be an impression I got because this song is one where she doesn’t play
flute. There was another song later on where she only adds one line of backing.
She normally does that on Iain’s mic but she came out to the front mic tonight. 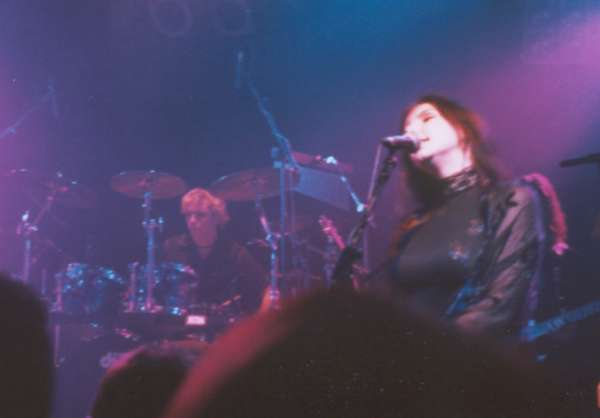 I think “Winter Mountain” was a lot better opener than “Return Of The King”.
I wasn’t keen on the idea of the band coming on as just the boys and then adding
the girls for the next one. I was disappointed that “Return” was completely
dropped though. I was also a bit annoyed when they seemed to be selling “Music
Inspired By Lord Of The Rings” for only a tenner tonight. I paid £15 at Forum.
Oh well. Anyway it seems a shame there was nothing in the set from it unless
you count “Out Of The Inn” which to me is a first album track. 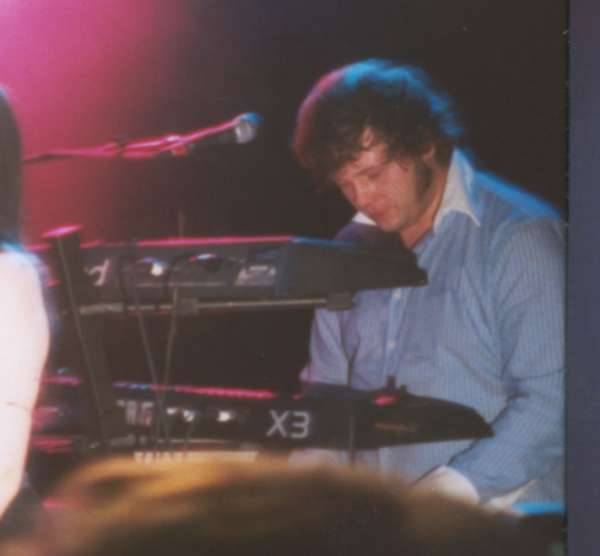 “Dark Before The Dawn” was next and this was followed by “The Spirit Of Autumn
Past”. Heather introduced this one with her "Let’s imagine we are in a
forest" speech. I am still not keen on this. I prefer more natural talk.
The speech still felt written. "We wrote this about …." strikes
me as a lot more down to earth and less hairy fairy.

In fact Heathers intro for "Evergreen" was the way it should be to
me.

This was followed by “Out of The Inn”. Liam came forward with his acoustic
guitar for this one again. 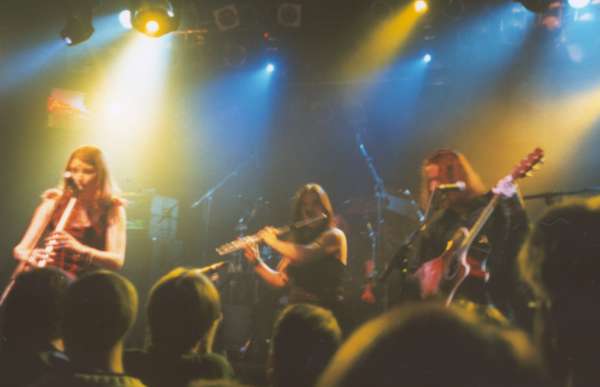 Being on the right side I was determined to pick up Liam’s contributions in
the mix tonight. I managed to focus away from Bryan and Heather quite well tonight
so I watched him most of the night. I still can’t really make out what he is
playing though and this annoys me. I can see he is putting lots of effort into
his part bending notes and strumming away etc. I just can’t relate a sound to
a vision. I did notice he plays the Thunder claps in “Mother Nature” as a down
stroke on all the strings and other odd little things but half the time what
he plays is too similar to Bryan’s movements for me to pick it out. Maria was
surprised I can’t pick him out but she was no help on me identify his sound!

“Nowhere To Hide” was next followed by “Shrinking Violet”. Heather thanked
everyone one for their support and said how touched she was that the Classic
Rock Society had voted it track of the year. Rachel Jones from Karnataka returned
the earlier favour and sang backing vocals. Again Rachel and Heather interacted
well and I was amused when Heather was clearly noting what top Rachel was wearing. 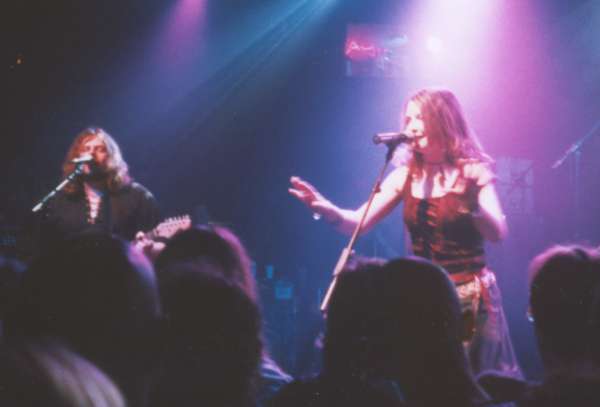 Next up was “Shindig”/”Haste To The Wedding”. Then “Never The Rainbow”.

The set finished on “Heroes Never Die” and the encore as mentioned earlier
was “Mother Nature”. Unfortunately Iain’s keyboards went wrong just as he was
doing his solo, which was a shame, but I guess that’s part of life on the road. 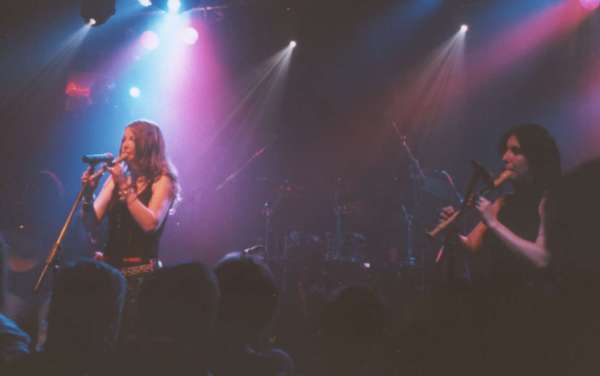 So overall two great bands in one night. What a Bargain! If you haven’t seen
them you really should make an effort to. I hope they can inspire so other young
bands to play great music too.