My photos for this one are barely worth showing but I will all the same. At
least the first two are OK 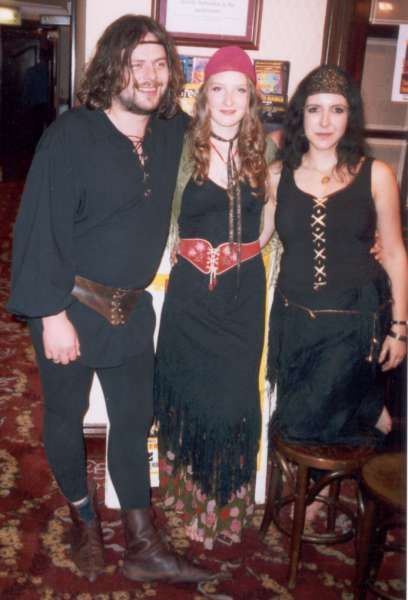 Liam made sure I spotted Byran’s boots

I was undecided as to weather to make an effort to see Blackmore’s Night but
asI had heard Mostly Autumn were now singing in there set so I decided it would
be worth the overnight stay if the were on the bill. The bill wasn’t confirmed
for ages and in the end Bryan Josh felt they would be allowed to play York even
if they didn’t officially get the tour. I therefore decided York would be the
date for me. It isn’t too bad to get to by train either. 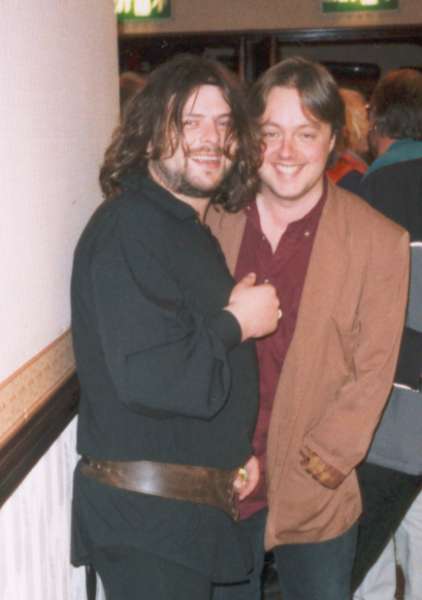 Troy Donockley turned up to give moral support.

Before the gig I meet up with Liam Davison did an interview with him. Apparently
only his 2nd one. The first being for the DVD. It was quite interesting to chat
and get a different perspective from someone that has know Bryan since they
were kids.

York Opera house is very much and Opera House style place. I was near the back,
which is very much under a lower circle. This meant my view of the beauty of
the building was obscured. All I could really see was the stage. I was the end
of the row on the left and sadly the stage set up was biased to the left to
so when Blackmore’s night were on I didn’t realise there was a female backing
singer until I tried to identify what was going on with Candice’s vocals. I
also couldn’t see the keyboard player. There were two levels of Circle and little
boxes on the side of the theatre so it is a very nice little place. I guess
it must hold about 1000 all together. 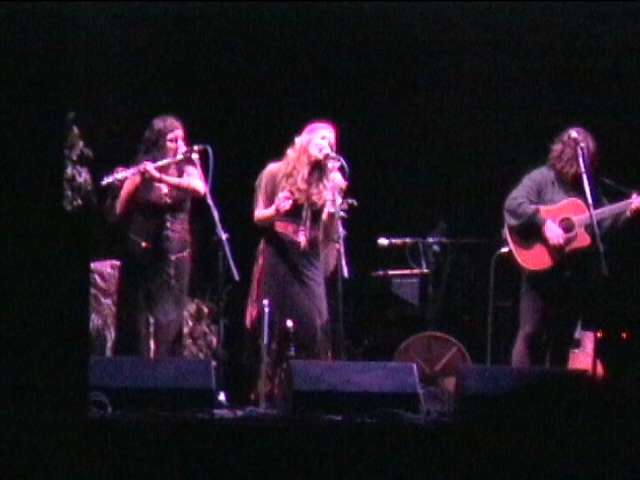 I think the set was something like Out Of The Inn – Flute, recorder, Guitar

Evergreen – This was very effective. Angela backed Heather on vocals before
adding flute. Bryan then joined in on vocals at the end. 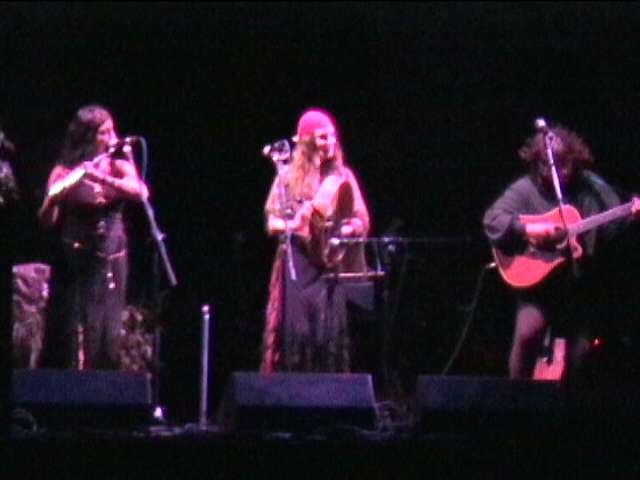 Which Wood – Flute, tambourine and guitar. Heather then joined on Recorder.

This was followed by two more instrumentals Dry something and Lannigan’s Ball.

Shindig/??? – The usual three piece format with Heather Bodhran or block or
something

Eyes Of The forest – Heather Singing. Very nice. I didn’t used to like this
but it has grown on me.

Overall very nice but of course far to short. 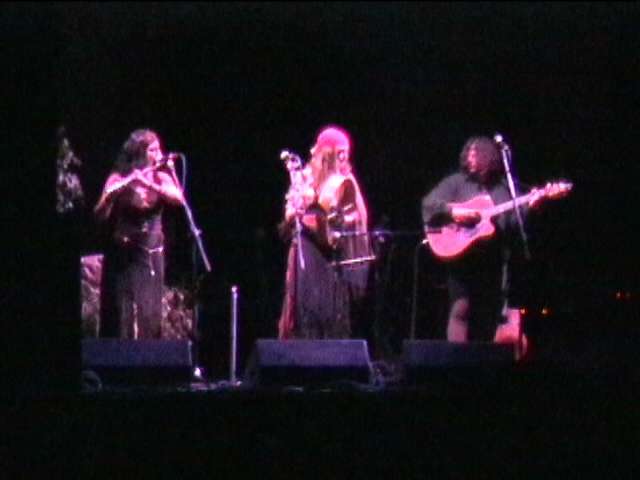 I now know what to expect from Blackmore’s night and I think we pretty much
got it. I get the impression he likes playing York. There was mention of him
playing here with the Outlaws. Also the story of him meeting a ghost in one
of the dressing rooms.

He also seems to play a long time here. I got the impression he had played
longer on the last tour and he certainly gave good value for money here. We
even got a Black Night out of him!

Ritchie was also very clearly enjoying himself. There were lots of smiles all
night.

Just before coming back for Black Night he even came on and tried to get us
to leave by appearing with a broom and brushing the stage!

The set to start with felt very similar to last time. I am not sure if it was
or not but I certainly felt there were a lot more differences in the 2nd half
of it.

I have already said how happy Ritchie was but the entire band seemed to be
having a good time too.

I am still not sure I like Candice. There is something I just find very false
about her. Perhaps she is just too nice and sweet. Whatever it slightly grates
on me. Especially the "Ritchie says" stuff. Surprisingly half the
time we could hear what he said anyway which was nice. There was less of the
well rehersed "funny" chat this time. IE the intro to "Sixteenth
Century Greensleeves" was very brief compared to last time. She got a good
cheer when she first arrived on stage so she is clearly very popular. In fact
I don’t know anyone with my reservations about her. The song order was apparently
still random so the set felt very informal and unique. I guess I would have
to check set lists of other nights to find out if it really was as loose and
informal as it felt.

Candice seemed a better vocalist to me this time. I also couldn’t help thinking
some of her smiles reminded me of Ronnie James Dio. I also noticed she seemed
to be able to sing fairly low which I found interesting.

It has to be said I found I was counting down the time until the last song
was announced. It’s not that I wasn’t enjoying it; it was probably just a case
of not enough excitement to combat the fatigue factor. 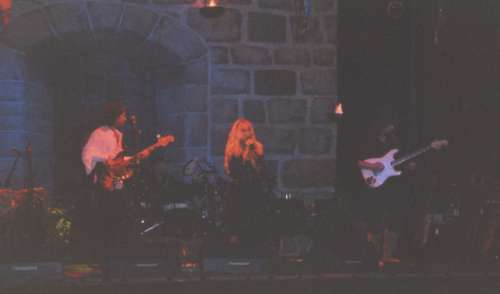 There were some nice stage effects. For instance a fire effect seemed to be
created by having cloth blown in the air with Orange light on it. The overall
lighting was very dark again though. It must be to hide Ritchie’s smiles! It
was certainly hard to make out his features from my distance.

I think last time the backing vocalist played a 2nd keyboard. It must have
been a different one this time as this one didn’t. (From what I could see when
someone left) There were no walk out’s this time actually. It was just people
having to get home at a certain time I think. 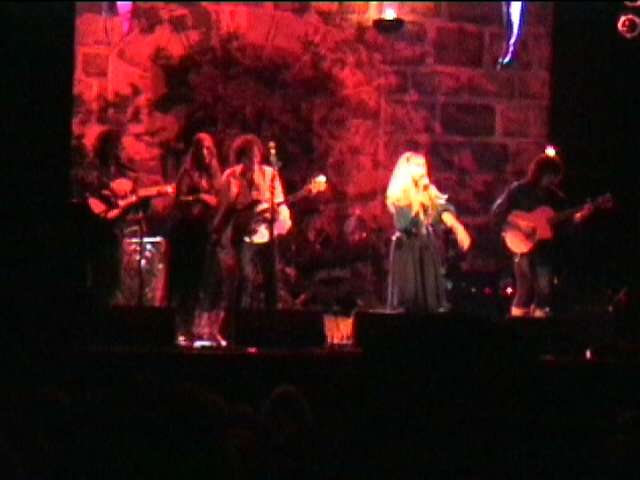 The multi-instrumental Violinist was the guy that impressed me most again.
I very much enjoyed his violin playing and Ritchie seemed to give him a load
of solos, which was nice.

Unusually Ritchie seemed to have a female guitar technician. She was like the
rest of the band and Mostly Autumn dressed in Renaissance clothes.

Just before Renaissance Fair Ritchie invited Mostly Autumn back on stage. I
lost track of what happened to Angie but I am sure she went on to start with. 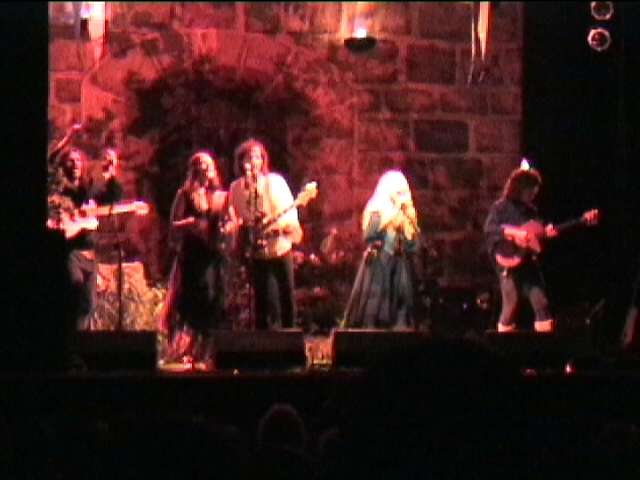 Bryan must be floating on Cloud 9 at the moment. First the DVD is fulfilling
some of his dreams for the band and then he gets invited to play on stage in
his hometown with Ritchie Blackmore. He actually did a second song Spanish Nights
or something a couple of songs later too.

Again it was a good day but I was certainly rather blown at the end of it all.
I tried to keep going for a bit after the show as the was talking of going for
a meal and I was hungry but it got too late and to be honest I was really dropping
off and in two minds weather to just to back to the hotel and sleep.